1.)   Drive Growth and Innovation in the Supply Chain

3.)   Controversy of Clonentrepreneurship: Cloning the Idea or Hatching a Start-Up?

Last time in Part II, Cultures of Risk—Financing the Startup of Start-up Communities, I discussed:

Read Introduction (to the series)

The ‘take-away from Part II. Local investors in the emerging markets ‘buy’ risk by investing in the known and understandable. This explains why they finance business models of fast moving consumer goods, food and beverage, supermarkets, telecoms, light manufacturing and automotive components as examples.  Investors finance such business models even at the seed and early stage of company development.

The reason investors invest as they do; markets and customers are a 100% guarantee in these sectors, even in greenfield projects, with the risks of investment in execution, not the risks of market existence and the uncertainties if the tech will work, will customers come and pay.

Clones copied, localized and pasted into emerging economies impact the DNA of investors to risk since many generate revenue quickly—overcoming the fears that investors have for early stage tech.  But impacting the behavior of investors to risk is not the only contribution of clones to the start-up of start-up communities.

Drive Growth and Innovation in the Supply Chain

Although clones look the same on the surface, one country to the next, there are multiple differences in execution.  Many clones require supply chain partners for them to work, yet many of these companies do not exist in emerging countries.  While outsourcing from delivery to call centers are common services for hire in the US and Europe, clones frequently build them themselves, in what I call ‘self-sourcing.’  In other cases, new supply chain entrepreneurs emerge to offer the services to make clones work.

Lack of effective and efficient delivery companies forced Ozon, the Russian clone of Amazon, to organize its own logistics operation for door-to-door delivery of goods to their customers in Moscow and St Petersburg plus the delivery to more than 2,000 pick-up points across the Russia Federation.  With this asset in place, Ozon offers delivery services to others as the market for online businesses grows in Russia.  Like Ozon, the discount shopping club KupiVIP delivers product with its self-owned fleet of 100 vans; it leases extra vans when capacity is short. Yes FedEx and DHL exist in Russia, but the cost for local delivery approaches $100, too expensive for a book costing $15 or a $40 pair of shoes.

65% of all transactions in Russia are paid for in cash.  Almost 90% of Ozon revenues ($300 million) are cash.  ATM’s that accept cash for payment are widely used in Russia, made by QIWI, a Russian innovator.  But a new complication develops in a cash economy. In Russia for example, customers regularly inspect the goods to confirm that what was ordered is actually in the box. 25% of all online orders are rejected by the buyer with no money trading hands in cash transactions, or a credit has to be made if payment was made through a QIWI terminal, another snag that required innovation for e-commerce clones to work in Russia (and other emerging market economies based on cash vs. credit or debit card transactions).

50% of Ctrip (Chinese online travel company) customers purchase tickets by phone as do large numbers of Russian customers of Ostrovok, a Russian online travel company.  Both Ctrip and Ostrovok operate self-owned call centers staffed with real live persons to reassure customers that their on-line orders are placed, accurate and confirmed.

Clearly what emerging markets lack in the sophistication of online shopping in the United States creates a sea of supply chain opportunities for more start-ups to service clones in the developing world.

It’s great to talk about the need for failure, how great business models evolve from failed attempts and the need to encourage more failure. The question is who pays for this learning, and how recover from it? Investors not only in Russia, but other emerging markets label a failed entrepreneur a loser for life, never to raise money again with failure an embarrassment that frequently spills onto her or his family; such shame creates an environment where entrepreneurship is discouraged as a career path vs. a ‘safe’ job, e.g., working for Government, a state-owned enterprise or a multinational corporation.

Even more troublesome is another deep seated cultural attitude to failure in emerging market countries.

Failure = Fraud: we know this is not true, but that’s the verdict when entrepreneurs fail in emerging markets.

The attitude that failure equals fraud stems from ‘who pays for the cost of failure’ as failure in emerging markets means the promoter, the entrepreneur, and the team did not possess the competencies to overcome the challenges of development, or did not really understand all the requirements needed (or did not do all) for success. Yet we know that experimentation, trial and error, failure and pivoting are necessary to define the requirements for business model creation, making the path to progress unlikely in developing countries.

In the former Soviet republics, East Europe too, entrepreneurs and scientists have financial responsibility to repay money under failure; prosecution and jail-time are real possibilities.  Even more chilling are the threats of investors to entrepreneurs “You lost my money (equity), now you must pay the money back (i.e., the investment is equity if achieve success, debt if the venture fails!).”

The fears of investors, attitudes to failure and who pays for failure create a culture that makes early stage venture capital dicey in the emerging markets.  Such behavior discourages risk taking and incentivizes entrepreneurial commitments to proven business models for proven markets like fast moving consumer goods, retailing, wholesaling, telecoms, and yes, clones from Clonentrepreneurs.

But given the successes of clones to start an entrepreneurial revolution in a country, they are not without their critics.

The Controversy of Clonentrepreneurship: Cloning the Idea or Hatching a Start-Up?

Given the successes of clones to satisfy the appetites of domestic customers and local money, they have their critics when taken to the extreme.  Sarah Lacy wrote an upbeat article in TechCrunch about copy-cat business models in China yet almost three years later levied stinging criticism at the Samwer Brothers with their rip-off of Fab.com called Bamarang.

Their newest clone for the Middle East Lazada is especially bold: I thought I had inadvertently landed on Amazon, that’s how closely Lazada resembles it.

Even Union Square venture capitalist and blogger Fred Wilson jumped into the frying pan with his opt on cloning start-ups.

Condemnation aside, one can’t argue with the quick and profitable financial successes of cloning.

Controversy intensifies when founders clone not just the idea, but every pixel of the start-up to make the clone an almost exact duplicate of the original as the Samwer Brothers did.

In Russia there are multiple groups creating and financing clones.  One of the most aggressive is Fast Lane Ventures which cloned Pinterest (PinMe), Quora (OdinOvet), Eventbrite (Eventmag), Airbnb (RentHome.ru) to name a few; their Zappos clone Sapato was acquired in 1Q2012, 18 months after launch for an approximately 2x return for investors including Fast Lane (plus Intel Capital, eVenture Capital, Kinnevik and Direct Group too).

Clonentrepreneurship is sweeping not only Russia, but all of Planet Earth.

Cloning has become a trusted way for more entrepreneurs to raise more money from more investors, thereby financing the future of their start-up communities, not only in the emerging world, but developed countries too as the explosion of car sharing clones demonstrates. 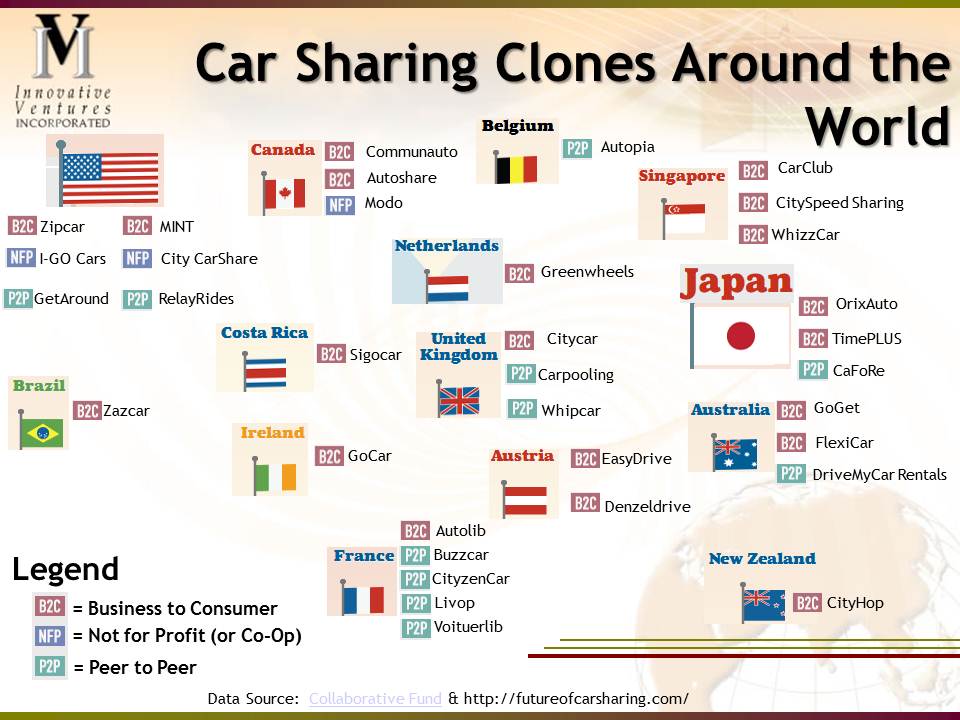 Zipcar was one of the first to execute Internet business models for the sharing of cars.  Zipcar was not the innovator, but the imitator with Vancouver’s co-op called Modo operating for more than 15 years and the catalyst that helped communities and non-profits get car sharing started in several continents.  While it may not have started in the Internet space, Modo was one of the first to institutionalize collaborative sharing in the community.

So what is really being cloned, who is cloning what and to whom?

Is it car sharing or the collaboratively sharing of underused assets and transforming them into new business opportunities? If the later, clonentrepreneurs are hard at work around the world creating the next set of companies in the sharing space to take advantage of this social movement as these examples demonstrate:

Given the contributions of clones to spark the startup of start-up communities, are they a panacea to growth? Do alternatives exist in the quest for growth? And what can actors in the start-up community do to impact investor DNA for more seed and early stage investment?

For Next Time—Part IV: The Quest for Growth

1.)   Clonentrepreneurship or Alternative Paths to the Start-up of Start-up Communities?

Comments, opinions and questions are welcome here or send directly to me at Tom@IVIpe.com

Be well and be lucky.

We use cookies to ensure that we give you the best experience on our website. If you continue to use this site we will assume that you are happy with it.Ok